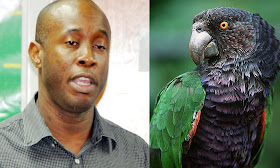 The Roosevelt Skerrit government, caught once again selling bits and pieces of our national identity, is again attempting a coverup in the case of the illegal export of our parrots. To the rescue is the PS in the Ministry of Agriculture Reginald Thomas. In a lengthy statement issued on Tuesday in response to the controversy, Mr. Thomas lied to the public, stating that the parrots were exported legally and with the blessing of CITES, the Convention on International Trade in Endangered Species.

Less than two months ago, on January 30th, CITES issued a Notification To The Parties bulletin that, among other things, bars the trade of CITES-listed species (including our parrots) from Dominica, ostensibly because Dominica has not filed its annual reports to the CITES Secretariat for 3 years. Mr. Thomas has this report on his desk; he must now tell us how he managed to get CITES to approve the export of our birds less than 40 days after the organization said no. A prerequisite for obtaining CITES approval would have been responding to the organizations' demand for Dominica's annual reports covering the last 3 years. Is Mr. Thomas going to tell us now that his ministry submitted the reports to CITES? If so, when? And if his ministry was able to submit 3 annual reports so quickly, why wasn't done when it was supposed to have been done? Where were these reports all along? Under his mattress?
The Roosevelt Skerrit administration is a gang of corruptible officials akin to a criminal enterprise. Theft and criminality appears to be genetic in this crime family. Mr. Skerrit has sliced out a section of our National Park for his hotel scam at the Cabrits (neither Range Developments nor Kempinski owns the land, but it was given away. To whom? Who owns the land on which the Kempinski Hotel sits?). He has sold our National Flag, which now adorns many ships plying the routes of the Western Pacific evading United Nations sanctions. Mr. Skerrit continues to sell our National Identity, our passports. Now he is selling our National Bird; what's next, the Nationals? They're already turning a blind eye to the selling of our Kalinago babies to foreigners, is the population of African decent next? Are we next on the list to be sold? Will Mr. Skerrit get to the point where he determines that it is better to sell us than continue to bribe us, as he does now?

Mr. Thomas stated that he checked with officials in St. Lucia and St. Vincent about their experience with the group in Germany before signing off on the export of our birds. By his account, these nameless officials gave him the thumbs up. He also said that he looked into a similar program in Brazil with the Spix Macaw and found no issues there as well. What Mr. Thomas did not say was that in each of those countries, agreements were made to preserve and care for the indigenous birds in country, or in situ, as it is called in the field. In all 3 countries Mr. Thomas made reference to, Martin Guth has assisted with the commissioning of aviaries where the parrots in country. In Brazil, the rehabilitation project included purchase of land for the birds to reside. So the question is; why didn't Mr. Thomas and his ministry insist on the establishment of a National Aviary, with external assistance, that would care for our birds right here in Dominica? After all, this is their home. We could also train some bright young Dominicans as caretakers. Jobs, in other words, for our young people. Or, why did Mr. Thomas not insist that Mr. Guth partner with our sister islands, utilizing their aviaries in the captive breeding program? Why are our birds not in St. Lucia or St. Vincent where the climate is identical to ours? Why are our birds in Germany?

In his statement, Mr. Thomas noted said; "After witnessing the devastating effects of Hurricane Maria on the forest and the birds, and the impending upcoming more active hurricane season, it became evident that the birds, if left in the forest, would be impacted again and could possibly lead to extinction". Lovely words, but pure bullshit. If Mr. Thomas was so concerned about the effects of the birds in the wild, why then did he and his ministry not initiate a program to capture the birds in the wild for safekeeping? Mr. Thomas, in the event that you forgot, the birds you sold to Martin Guth were already in captivity, so how is that going to safeguard the birds that are now in the wild that you would like us to believe you care about? Lies lies and more lies. You were paid handsomely by Mr. Guth and you are attempting a coverup. Furthermore, why isn't this issue being addressed by the Forestry Minister, Mr. Skerrit?

The Rare Species Conservatory Foundation based in Florida, USA, had something to say about the illegal export of our birds. In a lengthy commentary, the foundation expressed concern at the development. In its statement, the foundation said;

The Ministry of Forestry must present to the public all documents relating to the export of our parrots. We need to know about the amount of Euros paid over and under the table. This crime family we have that passes for a government must be stopped by all means, otherwise we will have nothing left for our children and grand-children. This nightmare must be brought to an end. MiTC will continue to track this story as it has garnered interest all over the world. We have been receiving emails from individuals and groups from as far away as Australia, Italy, Singapore and South Africa. We continue to press official organizations for comments; we will bring you those as they come through..