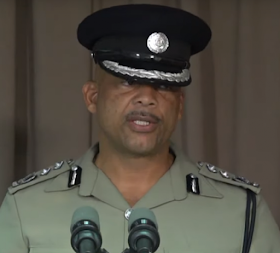 The Dominica Police force has become a cesspool of corruption and incompetence and that is so strictly because the Roosevelt Skerrit administration insist on maintaining a police force wholly in it’s control. It is in deed a police force formatted to suppress political opponents or dissent through brutality and high handed suppression tactics.

In an effort to retain power in Dominica, Roosevelt Skerrit who has sole discretion in the leadership of the Dominica Police force has not been shy about placing puppets in places where they don’t belong within the police institution. The Prime Minister is also fully aware that his puppets are not the brightest bulbs at the police headquarters however the puppets do understand that their appointments are transactional and their duty is not to state but to the dictates of the despotic prime minister.

With the appointment of puppet commissioners like Cyril Carrette to Daniel Carbon and now Lincoln Corbett, police deviance continues to permeate throughout the police force. Corruption and ineptitude have become the order of the day and the morale of the police is at its lowest.

In 2010 then Commissioner Cyril Carrette understood very well that in order to appease the prime minister, the firebombing of the GON Emmanuel’s residence in Goodwill should never be fully investigated and that Denny Shillingford who confessed that he committed the crime at the behest of the Prime Minister’s lawyer ,Steven Isidore, shall be allowed to play “Wishy Washy  “ with the esteemed criminal investigators within the police force. Denny Shillingford is yet to be charged for the crime or for making false statement. Daniel Carbon who replaced Cyril Carrette promised to follow through with the investigation but ten years later the investigation still sit in a locker at the prime minister's office.

How can the honest hardworking men and women in the police force be motivated when the prime minister recently appointed Lincoln Corbette as acting police commissioner? Apart from not being academically qualified it is a well known fact that acting commissioner has a sordid reputation and has proven to be a danger to the public.  Corbette has been involved in multiple unjustified shootings and accusations of physical aggression and in any other law abiding jurisdiction he would have been dismissed and or even imprisoned for police brutality.

While most Dominicans are aware of the famous shooting incident at the Convent Prep elementary school there are other violent incidences that the general public is unaware off.

About two years ago the now acting police commissioner was involved in an incident whereby a bullet from his weapon went through his neighbor’s property causing damage to the neighbor's property. We learn that Corbette had to pay the neighbor for the damages done. Our investigation also indicate that the weapon was discharged during an alleged domestic altercation. Needless to say that was also covered up. We learn that Lincoln Corbette had the backings of politicians and so police commissioner Carbon had no real authority to discipline Lincoln Corbette.

In another incident, Corbette allegedly shot a young man (bus driver) in the buttock while the young man was under arrest. According to our sources close to the police, the victim was accused of looting at Astaphan in the aftermath of the Hurricane Maria. Upon exiting the Astaphan compound empty handed the victim was arrested by the police and on the way to the police station it is alleged that Corbett deliberately shot the young man in his butt. We understand that upon learning of the shooting incident the then police commissioner Daniel Carbon was brought to tears. That too was covered up.

The general public is also unaware of the fact that the state has had to pay off a young man from Marigot who suffered a broken jaw at the hands and violent temperament of the same Lincoln Corbett. After the incident in Marigot, the matter was brought to the court and the then sitting magistrate Levi Peters threw out the bogus charges brought by Corbett against that young man. Magistrate Levi Peters also went on to chastised Corbette for the pain and damage he inflicted upon the young man. The young man went on to sue the State and Attorney General of Dominica. Ironically at the time of the lawsuit the same  Levi Peters who chastised Lincoln Corbette and dismissed his spurious charges had become the attorney general.  Some level of decency and ethics would have required Attorney General Levi Peter to advise the Prime Minister against the appointment of Lincoln Corbette as acting Police Commissioner but Levi Peter is just another Puppet taking orders from Anthony Astaphan.

In our eagerness to understand the aggressive behavior associated with the acting Police Commissioner, we spoke to a number of people from the La Plaine- Delices area where he is from. What we found out is that Corbett’s dad had been a police officer and even before Corbett himself became a police officer he had access to guns , allegedly threatening a neighbor while brandishing an unlicensed gun. It is also alleged that he would use an unlicensed gun to shoot at the neighbors chickens.

Corbette is not the only high ranking police officer with a checkered reputation. We are also aware of another high ranking police officer who allegedly raped an underage young lady. The alleged incident occurred while the young lady who is related to his wife lived at his house. This abhorrent character should be in prison for rape but the political directorate who are aware of those  allegations are happy to have him punish the political opposition and anyone who dare speak against the ills of the current administration.

The Police Service is critical to a functional society and its criminal justice system. The role of the police is to maintain peace, security and the rule of law. The effectiveness of the police service is developed on the trust of the people and community that they serve, not on the direction of politicians.  To achieve and maintain the community trust the police force must be free of corruption and should uphold the highest standards of integrity and accountability.

The integrity of the police force is measured by how the police approach situations and encounters with the public. Also how they make decisions and treat the people they serve on a daily basis. We understand that at the highest level of the police force, plots have been developed to victimize and arrest outspoken citizen and electoral commissioner in the person of Hilary Shillingford. Our information indicate that assistant police commissioner Davidson Valerie, commanded task force officers to specifically target and arrest Hilary Shillingford should he be found selling his agricultural produce on the roadside in Roseau. Note that on any day the Haitian and other Dominicans are all over Roseau selling agricultural produce on the roadside yet Hilary Shillingford who is simply trying to survive in severely broken economy has become a personal target for vindictive puppets like Valerie and Corbette. It is also public knowledge that another opposition appointed electoral commissioner Wayne James has been marked by the likes of Davidson Valerie for victimization and harassment by the police..

The police must be seen as the paradigm of justice and fairness in all situations and at all levels, personal and institutional. At this juncture the public confidence in the police service is not reflective of the view and understanding that the police service should be free of corruption, misconduct and political machinations.