Grand Mama use to say if you have to lie and cover up your actions then probably you shouldn’t be doing it and when lying and stealing becomes ritual then the more you hide is the more you will expose. Skerrit’s ascension into the position of prime minister of Dominica began with acts of shadiness, betrayal and massive cover ups and his entire stint as Prime minister of Dominica has been plagued by  multiple scandals and  mass corruption. Matters involving his sudden and unsubstantiated opulence are buried in shallow graves and with every attempt to burry a new scandal old secrets are exposed and more questions pop up.

With the ongoing scandal involving the Morn Daniel mansion it is quite obvious that Skerrit’s demand for $32000 per month rent plus another $32000 per month for house maintenance is just a means to detract from the true ownership of that palatial mansion in Morne Daniel. It makes no sense at all that the PM would want that much money to stay in his own house – at least that’s what Skerrit, Anthony Haiden and other collaborators would like us all to believe.

A “Mele Mélange” – a tangled web of Conflicting interest, Insider Trading and pungent stench of corruption.

In 2018 we received copies of a string of text messages between Skerrit and Melissa and in these text messages there is confirmation that Skerrit does have ownership interest in the Morne Daniel mansion. The attached photo shows part of the relevant conversation. The nebulous photo at the top right corner of the photo is what prompted Melissa to ask Skerrit some abbreviated questions -question we see as the smoking gun.

Please note that  the text conversations on the left side of the photo are unrelated but  left for credibility purposes. FB for example can verify that 1:50 AM text conversation with Roosevelt Skerrit. 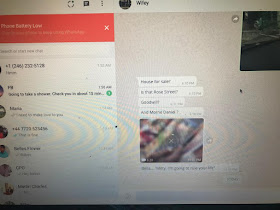 Upon receiving the photo noted, Melissa seemed confused and at 6:10 PM she responded with the question -House for sale?  We suspect that the house Melissa was referring too may have been the mansion in Viellecase since at the time rumors were swirling that Skerrit’s mansion in Viellecase was up for sale. Even more, in a 2018 parliament session Skerrit said to the then Speaker of the house and self- declared “Veremin Alix Boyd Knight that his house in Viellecase is up for sale and that if she wants the house she can simply hand him a check. The offer made to the self-declared “Veremin” may have been done in jest but it was in deed a subconscious revelation-it was the Freudian slip of a con man whose mind and heart was already set on moving into  his Morne Daniel mansion which was being constructed by his Foreign CBI agent and partner Anthony Haiden.

In less than a minute after her first response, Melissa followed up with a second question to Skerrit. She seem anxious and convinced that the answer to her first text is a NO so she followed up with the question  – Is that Rose Street?  Several other properties have been associated with the Skerrits but we have never heard of a property on Rose Street-Thanks to Melissa we now know that the Skerrits also have a property somewhere on Rose Street. We understand that Rose Street is somewhere up in the Morne Bruce area. Ma Boyde's  Kitchen may want to keep the back window open for fresh delivery on the Rose Street property.

At 6:11 PM Skerrit had not yet responded and so the materialistic junkie sent of another text message to her husband Skerrit. This time she is asking about another property in Goodwill. She asked  wrote “ – Goodwill?  The honorable Danny Lugay parliamentary representative for the Goodwill area must find that property in Goodwill and put it on the list of properties that will one day become part of Dominica's restitution estate.

Desperate and apparently feeling ignored Melissa was not done trying and at  6:18 PM Melissa asked Skerrit a forth question and that question  we now value at about $29 Million plus $64000 of monthly allowance to be paid by tax payers. Melissa texted  – “ And Morne Daniel?  Cant wait to hear the spinners spin this one. If Melissa was not referring to the Mansion in Morne Daniel what else was she referring too- the farm Land? Lets keep going ------

Why would Melissa ask Skerrit whether he was selling off the Morne Daniel mansion which was at the time nearing completion? The answer is the con artists were caught red-handed and would have been uneasy. The  people of Dominica knew then that the Morne Daniel palace was being built by Anthony Haiden ,for and on behalf of Roosevelt Skerrit. It is also note worthy that the election was drawing near and the  second mansion would have become an added embarrassment.

We anticipate that at some point in time this palatial mansion will be unloaded much like the 8 villas in Savanne Pailles and the ownership will disappear through a web of CBI agents with shell companies. We understand that Renneth “Bubbles Alexis who had been used as surrogate owner  for Skerrit’s  8 Villa property in Savanne Pailles had been uncomfortable with the idea that he was  totally sidelined during the selling of the property.

Sometime between 2015 -2016 Skerrit posted several photos featuring himself as a proud farmer working on his farmland in Morne Daniel.  It was more than a public relation stunt  – it was also the workings of the "Wanna Be Dictator" with the urge to flaunt another one of his real estate acquisition. Did the land really belong to Skerrit at the time ? I remain suspicious but documents filled in June of 2020 indicate that it wasn't.

Check This Out- Public documents show that Melissa’s parents only legally transferred the same property (Skerrit's Farm)to Melissa in June of this year 2020. So what’s going on and why was there a desperate need to show that the property was transferred from the Porpones  to Melissa Skerrit when five years ago Skerrit was already showing of the same land as part of his illicit collection of real estate properties. The mysterious transfer of the property to Melissa in June of this year seem like another act to cover up some wrongdoings.

The suspected motive - if legal documents show that the Morne Daniel land was willed to Melissa by Mama and Daddy Porpone then no one can question the Skerrits on the purchase of the land or even purport that Anthony Haiden purchased the land for and on behalf of Roosevelt and Melissa Skerrit.

As it is often said, it is not the crime that gets you it is the cover up. In the rush to cover up the ownership of the farmland in Morne Daniel, the Skerrits committed another egregious crime. They undervalued the property by about $20 per square foot and shortchanged the treasury in the region of $74000. By law and order Skerrit and Melissa should be wearing blue at the Stockfarm prison.

In today’s Dominica people supposedly of good moral standing are offended by those of us who point out what is now ritual abuse by Roosevelt Skerrit and his crime syndicate. They would prefer that we don’t talk about abuse and corruption, for if we don’t then  somewhere within their consciousness the ritual abuse is not happening. It is time we start naming and shaming those who are suppose to be the vanguards of morality in our Dominican society but for selfish reasons continue to support and defend  gang of criminals-

How do you men ask god for forgiveness every night yet every morning you wake up pretending that the blatant atrocities and crimes against a people don’t exist in Dominica.

The Pastor from Zicack Portsmouth we hope you find your conscience in Maryland– we still remember that infamous meeting in the United States when you told Skerrit that he should be proud of the Villas in Savanne Pailles because it was god’s gift to him.

We also want to call out the likes of

Gentlemen how long are you going to keep your heads buried in the sand. When you do, “you leave your backside exposed to those who seek to take advantage. “(Gary Hopkins) No pun intended

The 2004 United Nations Convention Against Corruption Kofi Annan, former Secretary General referred  to  corruption as an “insidious plague that has a wide range of corrosive effects on societies,” he added that it diverts funds intended for development, undermines the ability of governments to provide basic services, feeds inequalities and injustice, and discourages foreign aid investment.”  This is exactly what Dominica has become under the corrupt control of the Roosevelt Skerrit crime syndicate. A country where corruption sustains crime and criminal acts continue to protect the corrupt.